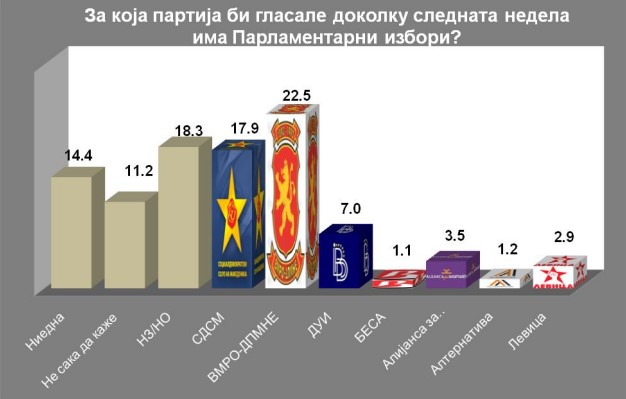 The opposition VMRO-DPMNE, which insists on snap general elections, still has a five-point lead over voters ahead of the ruling SDSM, while its leader Hristijan Mickoski’s rating is almost three times higher than that of the new SDSM leader and Prime Minister Dimitar Kovachevski, show the results published on Friday by a public opinion poll conducted by the Institute for Political Research from Skopje (IPIS) conducted a short telephone survey between January 17 and 19 this year on 1,124 adult respondents across the country, and in citizens expressed their views on their support for political parties and politicians, as well as the election of a new government.
When asked “Which party did they vote for if parliamentary elections were to be held next week”, 22.5 percent of respondents voted in favor of VMRO-DPMNE, compared to 17.9 percent that voted for SDSM.
DUI in this segment of the poll received a confidence of 7 percent, and the other coalition parties in power Alternativa and BESA by 1.2 and 1.1 percent, respectively.
On the other hand, the parties that make up the opposition campus in Parliament, the Alliance for Albanians and the Levica, currently have the support of 3.5% and 2.9% of the electorate, respectively.