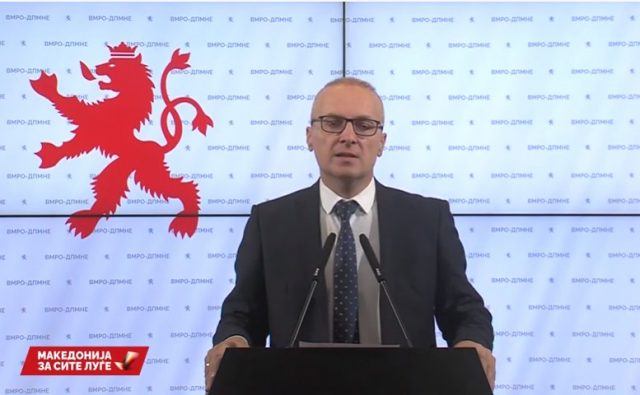 A session of the Parliamentary Committee on Foreign Policy is scheduled for Friday at 11.30 am, at which the attendance of the Minister of Foreign Affairs BujarOsmani is expected, informed the head of the Committee Antonio Miloshoski on Thursday.

“Osmani was asked to present the answers in writing that Macedonia gave to official Sofia in December last year on their so-called “5 + 1” plan, to be informed as MPs what it is about and whether such answers coincide and are within the Declaration adopted by the Macedonian Parliament where we have established common national positions, “said Miloshoski.

The VMRO -DPMNE MP hopes that the presence of the minister will be confirmed at Friday’s parliamentary commission.

“I expect to have an interesting, interesting debate at which I expect to receive more serious answers about the process, which has so far been shrouded in a dose of doubt about how transparently the Skopje-Sofia route is negotiated,” Miloshoski added.

Regarding the issue of the inclusion of Bulgarians in the Constitution, according to Milososki, VMRO-DPMNE does not believe that “the Constitution should be a currency for bribery in any political misunderstanding.”

“VMRO-DPMNE does not believe that the Constitution should be a currency for bribery in any political misunderstanding with any of the neighbors and we believe that we should be more conventional on this issue, to think more seriously and not rush with any promises that we see that Prime Minister Kovachevski gives them very easily, and thus he may not consciously or subconsciously understand that he is violating Macedonia’s negotiating positions,” Miloshoski added.