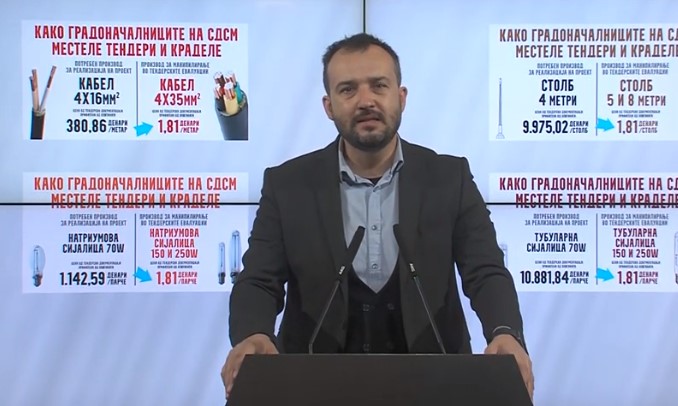 The SDSM mayors had a built system of criminal tenders, and the murky deals that they have made in the previous term come to light, said the VMRO-DPMNE EC member and opposition MP Mile Lefkov at Wednesday’s press conference.

“Today we will reveal a scandalous tender procedure conducted in the municipality of Butel during the mandate of VelimirSmilevski, mayor from the ranks of SDSM. It is a tender for construction of a new public street lighting on the territory of the municipality of Butel in 2021 which was won by a company based on the lowest bid, achieved at the public call but in the so-called. “The ‘lowest bid’ received as a set of unit prices hides serious manipulation and abuse,” Lefkov said.

The MP cited examples of cables and light bulbs in which the company offered extremely low prices for products that were not used in the contract, or were used in minimum amounts. This helped the company win against competing offers at the public contract. But it also asked for an extremely inflated price for a small number of items that are used in large quantities. This made the contract nominally appear more favorable, but in reality, it was made far more expensive, since the cheap items were negligible in the final price, while the extremely expensive items made the bulk of the purchase. In some items, the difference in the price was 5,500 times.