Home Macedonia We have a plan on how to secure snap parliamentary elections, says... 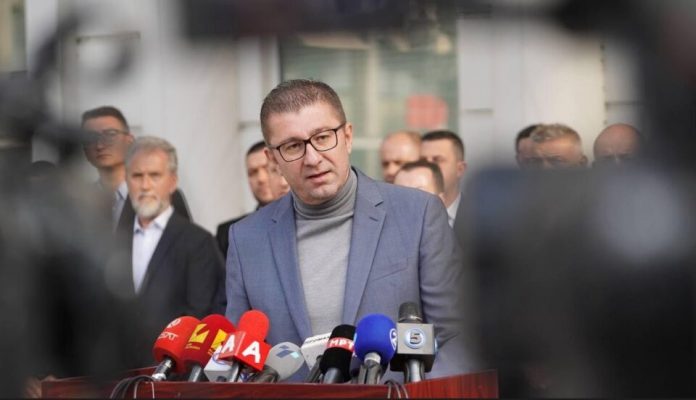 VMRO-DPMNE leader Hristijan Mickoski during Friday’s visit to Tetovo, asked whether they will radicalize the opposition front and how the elections will take place, when the government says there will be no elections until 2024, said that the opposition has a plan and strategy and will use all institutional and non-institutional methods and tools to get snap parliamentary elections as soon as possible.

“I don’t expect those who drive half-million-euro limousines to step on thick red Persian carpets in government offices, and lie down nicely in leather armchairs, while people starve and young people move out of the country and people die in hospitals or burn alive as was the case here in the modular hospital in Tetovo, that they will leave. It is normal that they will not leave. Of course, they will want to suck the people’s very last drop of blood and live on the suffering of the citizens. If you think they will leave on their own they will not leave, here I am telling you they should not tell you. But that is why we as the opposition have our own tools and methods, institutionally and extra-institutionally, to fight for what we think the people expect from us, and to be on the side of the people. Let’s not repeat the killing of people like the case with the modular hospital, let’s not repeat “BESA Tours” as was the case in Bulgaria and so on. I can give you many more such examples,” said Mickoski.

VMRO-DPMNE leader Mickoski adds that they have a plan and strategy as the opposition to achieve early parliamentary elections as soon as possible.

“Of course we have a plan, I’m a serious person and I always do things with a plan in life. Be patient, you’ll see,” said Mickoski.