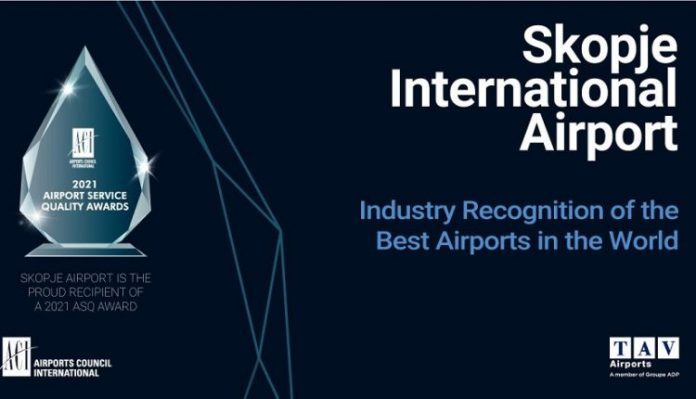 Skopje International Airport has been awarded by the International Council of Airports (ACI) with the award for quality of airport services (ASQ Award), for the best airport in its size and region (from 2 to 5 million passengers per year in Europe) and the best hygiene measures by region (Europe) for 2021.

The International Airports Council has announced the winners of this year’s Airport Services Quality Assurance (ASQ) Awards, which celebrate and promote the world’s best airports according to the passengers’ opinion.

As a participant in the ASQ program for passenger opinion research, Skopje International Airport, which is operated by TAV Macedonia, competes with airports of the same size – from two to five million passengers per year and in the same region – Europe, bringing in 2021 This year, this ASQ research panel consisted of a total of 11 airports: Madeira, Krasnoyarsk, Menorca, Santiago, Skopje, Sola, Tbilisi, Tallinn, Vaernes, Turin and Zagreb.