Home Macedonia Mickoski: Anything beyond the Parliament Resolution regarding the negotiations with Bulgaria, the... 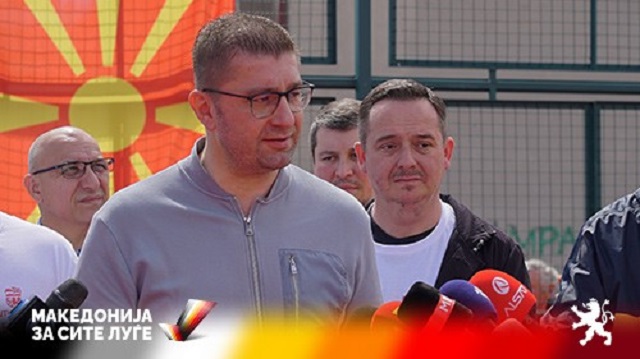 Anything that will be beyond the scope of the Resolution adopted by the Macedonian Parliament, the future government led by VMRO-DPMNE does not intend to respect and it should be clear to them, said the opposition party leader Hristijan Mickoski on Saturday, commenting on a media question that it can be noticed that there is disagreement in the Bulgarian ruling coalition, i.e. its survival depends on the solution between the two countries in the way that Bulgaria requires in the framework agreement.

“Anyything that will be beyond what is provided in accordance with the Resolution adopted by the Macedonian Parliament, the future government led by VMRO-DPMNE does not intend to respect and it should be clear to both (Bulgarian Prime Minister, Kiril) Petkov and ( Bulgarian President, Rumen) Radev, and that will happen soon. If they think that the fact that this government led by (Macedonian Minister of Foreign Affairs, Bujar) Osmani and (Macedonian Prime Minister, Dimitar) Kovachevski will sign is a done deal – it is not. From the information I have, I know that many EU member states are opposed to bilateral issues being part of the negotiating framework, because that way the negotiation process will be an endless story, i.e. anyone can block anyone and that the enlargement process will never become a reality. That’s why I have a clear message to Brussels, leave these exhibitions and circus performances to two politicians who did not even know until six months ago that this problem even existed. Neither Kovachevski nor Petkov knew that this process exists, let alone be the ones who will find solutions. That is why they are always optimistic and smiling,” Mickoski said.