Home Macedonia Nikoloski: Bulgaria should implement the rulings of the European Court for the... 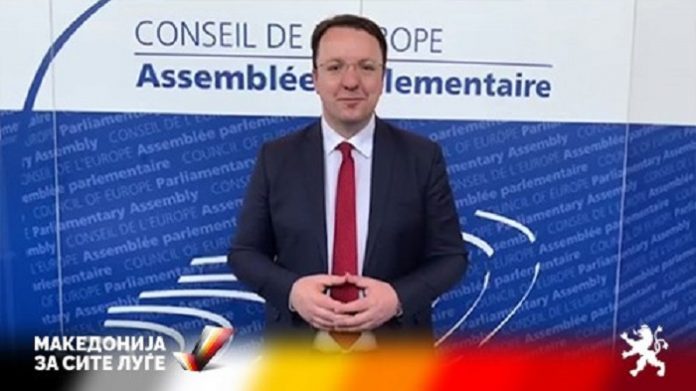 The strongest European institution for the protection of human rights is under the jurisdiction of the Council of Europe, the European Court of Human Rights. In the European Court of Justice, tens of thousands of citizens across Europe are seeking justice that they cannot find in domestic courts when their basic human rights, the right to freedom of speech, the right of association, the right to national self-identification and the right to use their mother tongue is injured, said VMRO-DPMNE Vice President Aleksandar Nikoloski before the Parliamentary Assembly of the Council of Europe.

Nikoloski stressed that Macedonians from Bulgaria have been fighting for these rights for decades.

“They have always lived there and want to exercise their national, linguistic and cultural rights, but unfortunately Bulgaria refuses to do so. Refuses to register its associations through which they want to exercise their rights. You will agree that this is an undemocratic act of a member state of the European Union. There are 14 verdicts of the European Court of Human Rights concerning the Macedonians in Bulgaria and so far none of them has been implemented by Bulgaria. None! This is a strong undermining of the court’s credibility and that is why the Council of Europe must act. In a time of war in Ukraine, when human rights are not respected, bad examples are not needed in Europe.

Bulgaria is continuously blocking Macedonia on its path to the EU, Macedonia cannot start accession negotiations for EU membership because Bulgaria constantly vetoes it, and at the same time Bulgaria does not respect the rulings of the European Court of Human Rights. That is the hypocritical policy that must end.

Macedonia needs to start EU membership negotiations because the citizens of Macedonia deserve it, and Bulgaria to provide the basic human and linguistic rights of Macedonians in Bulgaria. Only such an approach can lead to good neighborly relations and friendly relations between the Macedonian and Bulgarian people,” said the Vice President of VMRO-DPMNE in his address.