Macedonian citizens have the greatest trust as a politician in the leader of the opposition VMRO-DPMNE HristijanMickoski, show the results published on Sunday from the research conducted by the IPIS institute.

Thus, according to this survey, Mickoski enjoys the confidence of 16.2 percent of voters, while the current Prime Minister and leader of the ruling SDSM, Kovachevski is supported by 8.7 percent of respondents.

Former Prime Minister and leader of the Social Democrats ZoranZaev, on the other hand, has approximately the same rating with his successor in the position Kovachevski of 6.4 percent, which indicates that the current leader cannot convince his party members in their own credibility.

Among the politicians from the Albanian corps, Ali Ahmeti from DUI enjoys 7.3 percent trust, while the leader of the Alliance for Albanians, ZijadinSela, is supported by 3.9 percent of respondents. Bilal Kasami has 3.9 percent and AfrimGashi 1.0 percent support.

It is interesting that after a long time in such polls the name of the former leader of VMRO-DPMNE and longtime Prime Minister Nikola Gruevski reappears, for whom 1.4 percent of the respondents voted in this survey. 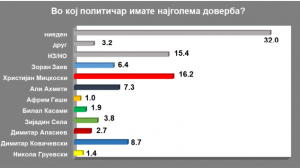