Home Macedonia If there is no agreement on elections, we will enter a phase... 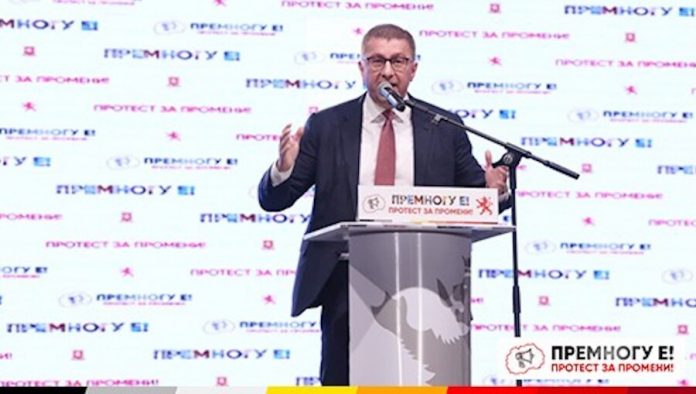 Kovachevski has not run in any elections so far, he is losing convincingly in the polls, and tens of thousands are protesting against him. The message is clear. This is the strongest message today that the people want elections. Kovachevski does not hide behind these offices, VMRO-DPMNE leader Hristijan Mickoski told the Prime Minister at Saturday’s large protest in front of the Government.
“How to get to the elections? The active blockade in the Parliament gave the desired effect. At the same time, I want to warn that if there is no agreement on elections this summer, then we will enter a phase of complete blockade. That complete blockade will be in the Parliament, but also blockade of the institutions, blockade of roads, protests in the cities. There will be a blockade of procedures and system in decay. That way we will not legitimize a system that is open wound and poisoned by crime and incompetence. Will all this be harmful, someone will ask? The answer is the biggest damage we are paying now, and our blockade will be to save from that damage. And there is no time to wait because the crisis will be even greater and even more fatal,” said Mickoski.