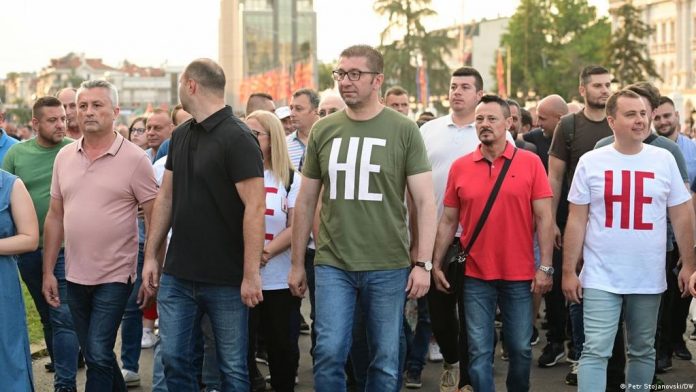 VMRO-DPMNE leader Hristijan Mickoski believes that the protocol with which Macedonia will have to fulfill Bulgarian wishes opens the door for negotiations for Albania, but not for Macedonia. According to him, it is a diplomatic knockout and capitulation. Mickoski pointed out that the start of the negotiations would require a change to the Constitution and the inclusion of the Bulgarians, and this would not be allowed by VMRO-DPMNE.

“That protocol opened the door for negotiations for Albania, but partially closed it for Macedonia. As Genchovska said, the real Intergovernmental Conference will not be held now, but with a change in the Constitution. And VMRO-DPMNE is the guarantor that this will not happen, because it does not have 2/3 of the power in the Parliament. Genchovska gave an example that she does not recognize the Macedonian language, will we answer that we do not recognize the Bulgarian language? Genchovska demands that the Bulgarians be in the Constitution, and demands that we renounce the Macedonians in Bulgaria. Is that reciprocity? Mickoski said.