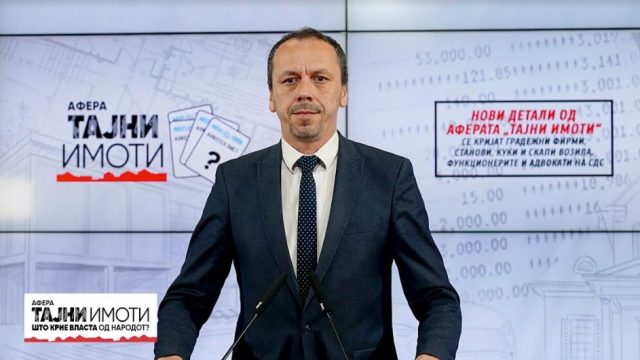 MP Brane Petrushevski stressed at today’s press conference that the public officials who hide assets through faint statements tried to twist the truth, but forgot that with each attack they only confirm that SDS is hiding assets.

The MP said that the “Secret Properties” scandal revealed that SDS and Dimitar Kovachevski, by appointing these persons to state positions, are hiding assets worth 30 million euros.

“We’ll start with Albert Musliu, who as an expert and analyst regularly defends the views of SDS hiding under the guise of being independent. But how independent is he really? On December 19, 2017, Albert Musliu was appointed as a representative appointed by the Government in the Management Board of the Holocaust Fund of the Jews of Macedonia. Musliu has not submitted his asset declaration to the State Commission for Prevention of Corruption (SCPC) in five years. “What is Musliu hiding? According to our research, Musliu owns a 118 m2 house in Skopje and an 81 m2 apartment in Centar in his own name”, Petrushevski said.

The MP also announced that the lawyer Ivica Jevtikj was also hiding assets, he is the most famous SDS lawyer who files the famous lawsuits against SDS officials for insult and defamation.

Petrushevski says that the director of PE Macedonian Forests, Valentin Gruevski, is also on the list.