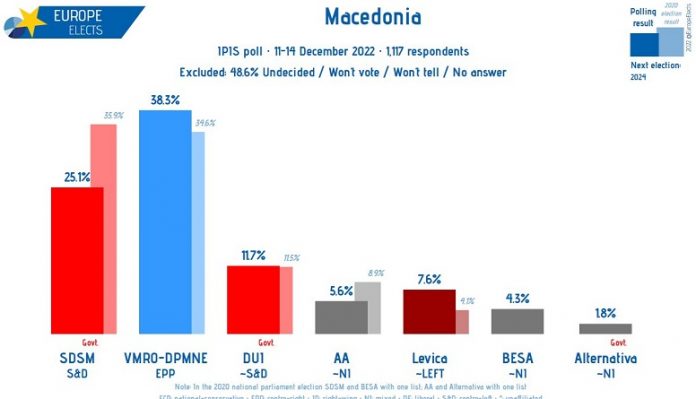 VMRO-DPMNE has a 13 percent lead over SDSM in the support it enjoys among the citizens of Macedonia, the IPIS poll showed on Saturday.
According to this poll, conducted in the period from December 11 to 14, 2022, during which 1,117 adult respondents were surveyed at the level of the entire country, VMRO-DPMNE enjoys the trust of 38 percent of citizens, while SDSM is supported by only 25 percent of respondents.
In third place according to citizens’ trust is DUI with 12%, followed by Levica (8%), Alliance for Albanians (6%), Besa (4%) and Alternativa (2%).
The IPIS poll shows that compared to November of this year, the support enjoyed by SDSM has decreased by one percent, which is also the case with Besa and Alternativa, while Levica, in the same period, has one percent bigger support.