Home World Venice Commission: The use of the Albanian language goes too far 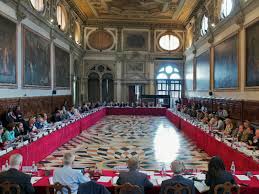 The Venice Commission, in an opinion adopted today, calls on the authorities in Macedonia to review the Law on the Use of Languages ​​through consultations with all parties concerned, MIA reports from Strasbourg.

According to a statement issued after today’s meeting in Venice, Council of Europe legal experts point out that compared to 2008 legislation, the new law significantly expands the use of the Albanian language and in many respects exceeds the European standards set by the Framework Convention for the protection of national minorities and the European Charter for Regional and Minority Languages.

The Venice Commission, while welcoming the authorities’ readiness to improve the linguistic status of communities, believes that in certain areas the new law may go too far by imposing public institutions on unrealistic legal obligations, especially regarding the use of Albanian language in court procedure, accompanied by severe sanctions in case of non-compliance and the possibility of changing court decisions, if there is a lack of translation and interpretation during the procedure.

In the Venice Commission’s opinion, this approach could significantly slow down the functioning of the entire judiciary, risking serious violations of the right to a fair trial guaranteed by the European Convention on Human Rights.