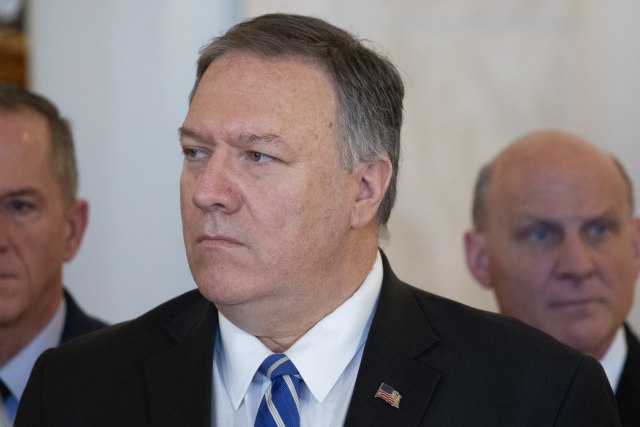 US Secretary of State Mike Pompeo has screamed and used obscenities at reporter
Mary Louise Kelly following an interview that he disrupted dissatisfied with her asking
questions about Ukraine, reports National Public Radio (NPR).

The interview was arranged and conducted at the State Department.
But Pompeo declined to answer repeated questions about Ukraine and the US
ambassador to Kiev, saying he had agreed to an interview on the administration&#39;s
policy on Iran. The reporter claims that it was agreed with his associates for Ukraine
to be one of the topics.
The NPR statement said that &quot;immediately after the Ukraine issue, the interview was
over.&quot;
Pompeo got up and looked at Kelly for a few seconds, then left the room. His
associate asked Kelly to accompany Pompeo to his State Department offices without
a voice record, the NPR said in a statement.
&quot;Pompeo in the room loudly expressed his dissatisfaction with the issue of Ukraine.
He used obscenities several times and asked the reporters – &quot;Do you think
Americans care about Ukraine&quot;?
The reporter herself later said: &quot;They took me to the secretary&#39;s private department,
where he was waiting and yelled at me for as long as the interview was going on.&quot;
According to her,Pompeo used the F-word.
He then asked her if she could find Ukraine on a map, and when she replied – yes,
he called on his associates to bring a map of the world without marked countries.
“I pointed to Ukraine. Then he removed the map. He said – people will hear about it,
he turned around and said there was work, and I thanked him and left, &quot;the reporter
said.
Neither the White House nor the State Department responded to CNN&#39;s request for
comment on Pompeo&#39;s behavior.