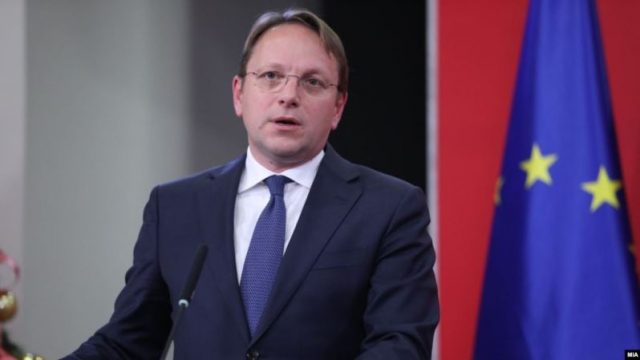 EU Commissioner Várhelyi tweeted that he looks forward to working with the new government of PM ZoranZaev on EU related reforms and priorities, in the interest of citizens.Europe demands constructiveness from other political actors as well, and this can be indicated by the status of the former EU Enlargement Commissioner Johannes Hahn, well known to the Macedonian public.

“It’s important that all forces in society work together towards this goal, in view of the progress on the path to the EU,” read Várhelyi’s post.

Former Commissioner for Neighbourhood and Enlargement Johannes Hahn, who was involved during his term in office in the country’s efforts to start EU talks, expressed satisfaction with the new cabinet.
“Good to see again a government with a clear European agenda in office! I wish Prime Minister ZoranZaev and his team all the best! In the interest of the country, its citizens and also again as a model for the entire region it’s important to create now a constructive atmosphere amongst political players when it comes to pursue common European goals,” Hahn tweeted.

MEP IlhanKyuchyuk who is the European Parliament’s Permanent Rapporteur on the Republic of North Macedonia, welcomed the new government in the country, and wished a hasty formationin an extremely difficult situation of a global pandemic.

“We must also mention Zaev’s emphasis on the neighborhood agreements with Bulgaria and the Prespa agreement with Greece as a basis for continuing reforms. The new government in Skopje, which is clearly pro-European, now has all the tools to continue the progress that North Macedonia has made in recent years. I believe that one of the first tasks of the new government is to prepare a roadmap for accession, based on a broad political consensus in the country. In the meantime, the EU Council should adopt the final text of the negotiating framework in order to convene the first intergovernmental conference as soon as possible,” Kyuchyuk commented in a written statement.