Although Bulgarian society was highly supportive of up to 80% of the veto on North Macedonia, the first major public opinion poll since the formation of the new Bulgarian government reveals a shift in views on a new approach to relations between the two countries, reports Deutsche Welle. 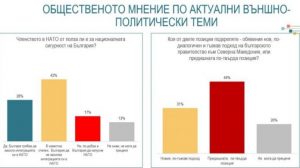 The announced new, more flexible approach in the negotiations between Bulgaria and Macedonia is supported by 31% of the respondents, 49% support the previous stronger position, and 20% could not estimate. These are the results of the answers to the question: Which of the two positions do you support – the announced new, more dialectical and flexible approach of Bulgaria to Macedonia or the previous confirmation position? The survey was conducted by Alpha Research from February 6 to 14 on 1,060 adult Bulgarian citizens from across the country, through a direct, standardized interview.

According to the analysis, with the exception of Democratic Bulgaria, supporters of all other parties in the ruling coalition, including supporters of “We Continue with Change”, preferred the current (old) approach. But, according to researchers from Alpha Research, this does not mean that the new approach is doomed to failure, but confirms the maxim – it is not enough to say, it is important to convince.

Bulgarian Prime Minister Kiril Petkov on Thursday tried to convince his interlocutors in Brussels that the new approach in the talks between the two countries is yielding results. He briefed European Commissioner for Neighbourhood and Enlargement Olivér Várhelyi on the concrete results achieved in just a few days, thanks to a new dialogue between Bulgaria and the Republic of North Macedonia. Petkov stressed that the results are crucial, not the deadlines, and expressed hope that the improvement of sectoral cooperation will contribute to mutually acceptable solutions to political issues.